The fol­low­ing week, I spent time with extend­ed fam­i­ly, and wit­nessed a group of young white adults chant­i­ng Hin­du bha­jans as a part of the clos­ing cer­e­mo­ny for the end of their yoga train­ing and lat­er went to a fusion wed­ding between a Pak­istani friend and her now white hus­band. I noticed so many things that I don’t know if I would have paid as much atten­tion to, had it not been for that week­end with SAALT in late-July.

And for that, I can­not be more grateful.

I’ve always gen­er­al­ly stayed away from the South Asian folks at my school, whether it was high school or col­lege. I don’t know if it is because of white America’s con­sis­tent mes­sage that being brown isn’t good enough, or if it’s because most of the South Asian folks I know seem to care more about Bol­ly­wood, bhangra, and med school (that they may not even want to attend) than about con­fronting the issues with­in our com­mu­ni­ty, or if it’s because I always thought I was so dif­fer­ent from them, or all of the above.

SAALT’s pro­gram gave me the oppor­tu­ni­ty to meet South Asians with whom I could relate and form a con­nec­tion. More impor­tant­ly, it helped me see that the South Asian-Amer­i­can com­mu­ni­ty that I’ve been around all my life is only a frac­tion of the whole.

Noth­ing but white­ness is good enough for white Amer­i­ca, and no mat­ter how hard we try to assim­i­late, we brown folk are still, at the end of the day, brown.

It took me a long time (much longer than I would like to admit) to tru­ly real­ize how much South Asians ben­e­fit from—and active­ly take part in—anti-blackness in this coun­try. I think I liked to believe that I sym­pa­thized with and cared about the strug­gle of black folk so much that it didn’t mat­ter that I was a part of this (in some ways) priv­i­leged group of people.

I look at my fam­i­ly and see how well we’ve played into Sil­i­con Valley’s ver­sion of the mod­el minor­i­ty myth—my par­ents came from India with noth­ing and “made it” here, but what does that “mak­ing it” real­ly mean?

It means striv­ing to reach the ide­al of Amer­i­can life—that is, mid­dle-to-upper-class white­ness. White­ness is our mod­el, and we brown folk, once we reach the peak that we are allowed to reach, are to be the sub­se­quent mod­el for black folk.

We are not to stoop to their level—it is, after all, the oppo­site of any­thing white, and in white Amer­i­ca, that is a sin. White suprema­cy wants us to believe, like them, that we are bet­ter than blackness.

That we are bet­ter than black­ness, even though it is the slave labor of black folk that paved the way for our immi­gra­tion to the Unit­ed States. 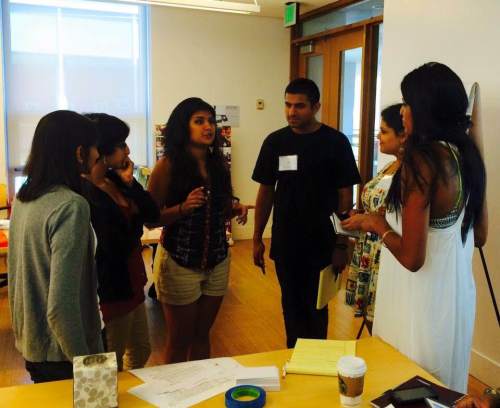 Brown and black peo­ple as a minor­i­ty race have a shared his­to­ry of resis­tance. We are also vic­tims of hate crimes, for instance, the Indi­an grand­fa­ther who was par­a­lyzed in Alaba­ma by the police in Feb­ru­ary. White Amer­i­ca con­stant­ly calls us “dot­heads,” “ter­ror­ists,” and tells us to “go back to where we came from.” But, still, we must be bet­ter than black Amer­i­ca, must we not?

My fam­i­ly and I were tak­ing pic­tures a few days ago, and my aunt called me over and said, “We need some light­ness in the pho­tos!” It was all “in jest,” of course, but these jokes come from a place of anti-black­ness. This pass­ing state­ment man­i­fests itself in oth­er fam­i­lies as self-esteem dam­ag­ing com­ments dur­ing desi par­ties, as par­ents for­bid­ding their chil­dren from going out­side in case they become too dark or peo­ple bleach­ing children’s skin.

I didn’t know that South Car­oli­na Gov­er­nor Nik­ki Haley was desi until a few months ago when my mom told me. She and Louisiana Gov­er­nor and 2016 Repub­li­can Pres­i­den­tial Can­di­date Bob­by Jin­dal and peo­ple like them have done all they can to assim­i­late into white, cap­i­tal­ist Amer­i­ca, but it’s still not enough. They still face racist attacks that their white coun­ter­parts would nev­er receive. They will always be con­sid­ered the “oth­er.”

I still strug­gle with society’s need to con­form to the majority’s stan­dard. I didn’t know what to say when I spoke to the white yoga teach­ers, who were chant­i­ng Om Asato Ma Sadga­maya, com­plete with acoustic gui­tar, on the shore of a lake. I didn’t know how to tell them that their rela­tion­ship with these vers­es, with the very prac­tice of yoga, comes from a place of priv­i­lege. I didn’t even know how to con­front my own fam­i­ly when they were mak­ing what they thought were harm­less jokes about everybody’s skin color.

I’m con­stant­ly told that I shouldn’t make every­thing about race (or class, or gen­der), that I need to be able to have fun.

But it isn’t fun when I’m par­tic­i­pat­ing in a his­to­ry of oppres­sion and racism.

My boyfriend—before he was my boyfriend—and so many oth­er brown men use the n‑word with each oth­er all the time. When I first called him out on it, he told me it was “just a word, San­jana!” But it’s not, is it? It’s not just a word. It is a vio­lent word with a his­to­ry of sys­tem­at­ic degra­da­tion and oppres­sion and slav­ery and mur­der behind it, and it is not ours to use, let alone to try to reclaim.

Unlearn­ing is a process, of course, and I am still in the mid­dle of it. Our choic­es as South Asians need to be delib­er­ate. We need to pay atten­tion to the peo­ple we look up to and aspire to be, to the things we want to do, even to the words we use. We need to exam­ine why we choose to stand on the side that we stand on. Because right now, the Unit­ed States is at war, and there is no mid­dle ground. Silence is com­plic­i­ty; there is no neu­tral­i­ty. We either stand on the side of the oppres­sor or the oppressed, and every choice we make is a tes­ta­ment to that.

I was in the car with my Pak­istani friend before her wed­ding, going to get her hair done, and she told me that the oth­er day, when she went to a salon, they tried to bleach her skin to make her lighter. The scary thing is, it’s not uncom­mon. She was told to lose weight and become lighter for the wedding—essentially, she was told to con­form to white, colo­nial stan­dards of beau­ty on a day that was sup­posed to cel­e­brate her in all her beauty.

We are being used as pawns in white America’s war against black folk. When we play into the mod­el minor­i­ty myth, we are only help­ing white Amer­i­ca oppress a peo­ple who have been oppressed since they have been here. When we make com­ments about skin col­or, we are doing what white suprema­cy wants us to do.

They seem like harm­less choices—even ben­e­fi­cial choices—but they are, in fact, vio­lent. They harm not only black folk, but they harm our own com­mu­ni­ties as well.

And, most of all, they are unacceptable.

This post was orig­i­nal­ly pub­lished on Brown Girl Mag­a­zine, and being repub­lished with their permission.

The Young Leaders Institute 2015 is sponsored by:

DONORS! TELL US WHY YOU SUPPORT SAALT.

HELP US MEET OUR GOAL!